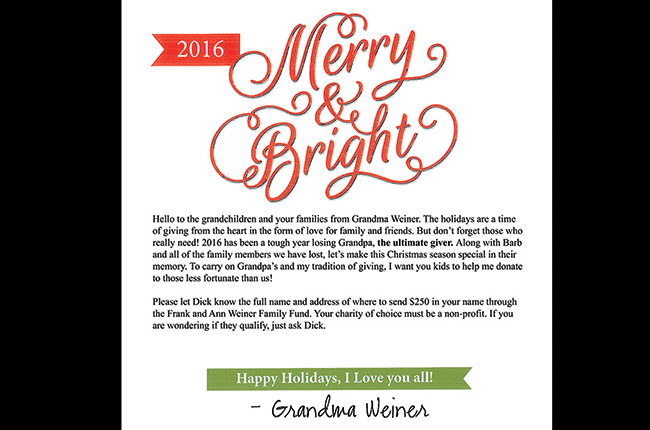 Dick Weiner remembers a time when his family had a lot less. He and his five siblings watched as their father, Frank, who began as a farmer and truck driver, purchased the Cartersville Elevators and began working his way into a new way of life – one of more means.

“Throughout the whole deal, dad spent money. He knew if he bought nicer stuff at work, it was easier on the boys who worked for him. He liked to share everything. It wasn’t until a few years ago that he started looking at giving money in this way,” said Dick, now owner and manager of the Cartersville Elevator.

The Frank and Ann Weiner Family Fund was established in 2010 with the Floyd County Community Foundation to further emphasize the family’s desire to use their finances as a way to give back to their community. Initially, the fund began with hopes of “someday” granting out money to organizations that have impacted their family. However, someday came a lot quicker than expected with their first grant begin awarded in 2011.

At Christmas time in 2013 and 2014, Frank and Ann gave their grandchildren letters which allowed them to pick an organization of their choice to receive a $250 grant. Dick was proud to be a witness to his children’s philanthropic choices.

“Me, I’m just worried about my little town, but the kids, they had other great ideas. My daughter wanted to give hers to the Lupus Foundation in Iowa to honor my first wife, who died of Lupus. There are just millions of good things to give to,” said Dick.

When Frank neared the end of his life, he continued to put the bulk of his assets toward the community around him. “Dad realized if you’re really successful, you are not going to spend all of the money. It is nice to give it to the kids, but they don’t need it. By starting a fund at the Community Foundation, you know for certain it is going somewhere good.”

For the Weiners, a donor advised quasi-endowment fund was the best solution for their desire to give. The family enjoys the convenience, growth, and security the Community Foundation provides in conjunction with the fund’s flexibility. The family believes their fund with the Community Foundation is a wonderful place to put their money because all the community needs to do is ask to receive.

Dick, a former member of the FCCF governing committee, wishes more organizations knew about the Community Foundation so they could be included in grant opportunities.

“Overall, what we did is exciting enough to tell someone about. You’re starting a legacy. Everybody wants to do it, they just don’t want the hassle, which is why this route is such a great advantage.”

Gifts of all sizes can be made through the Floyd County Community Foundation. Gifts can be made to existing funds currently supporting Floyd County, or families, individuals, or businesses can start their own fund. To find funds and get more information on starting a fund, go to floydccf.org or contact Terry Gaumer, affiliate development director, at 319-243-1354 or tgaumer@cfneia.org.